Thomas (Tom) Beard was a native of Pottsville, Pennsylvania, which is located in the hills of Pennsylvania. While at Pottsville High School, he played football and ran track. While on the track team, he won the Pennsylvania State Championship in the 4 x 200 Meter Relay. After leaving high school, he attended Thaddeus Stevens Trade School, which gave him an opportunity to learn the trade of drafting. Drafting lead him into the field of building management at the Department of Transportation, which he retired from in October 1986 with 32 years of service. During the many years of working for government, he helped to implement changes for young women and against racism within the FAA, DOT and US Coast Guard in improving their employment status to super grade levels.

After coming to Washington, DC and playing many years of semi pro football in the area, he decided that he was interested in becoming a football official. With the help of Mr. Adam Scott, he was introduced to some of the finest minds in football officiating. His future was set in the right direction after that point. He then became a member of the E.B.O. around 1966. With him wanting to be one of the best officials in the area, he was inspired by Mr. R. Melvin Jackson, Mr. Leo Miles and many others to do just that. He gave a lot of time and energy to officiating, but something told him it was time for him to pass on his knowledge and to start teaching football officiating to others.

Tom and Mr. Miles started a training program to create a situation where the metro area would produce some of the finest football officials in the world. Mr. Miles later relocated to New York with the NFL. Tom took it upon himself to carry on the program that was already in place, which the Tom Beard Camp was initiated. The Camp has always been free to those that wanted the knowledge to become a much better official. Tom had an extensive officiating career starting wit touch, flag, Boys and Girls Club, Sand Lot (semi Pro), high school and college (CIAA and MEAC) working many play off and championship games. One of the founders on the crew of officials selected to work in the MEAC. 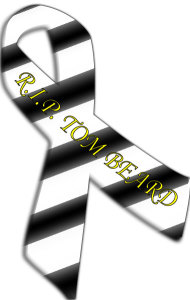 Tom’s career of officiating stopped for a while to fight the cause of younger officials behind him. In 1974, he challenged the ACC and the Southern Conference to open the doors wider for minorities. He often said, with the help of God and the Health Education and Welfare of Georgia, the doors were finally opened. He once said his parents often told him that there would come a time in his life where he would have to bare the burden of a cause for others and perhaps suffer the consequences of his actions. That is exactly what he did, fought the fight to help others.

Mr Beard transitioned from labor to reward on November 5, 2008 at the Washington Hospital Center. “Mr. Beard” to many and “Tom” to those fortunate to enough to be around his acquaintance and appreciate his critical officiating eye. We will miss him dearly.